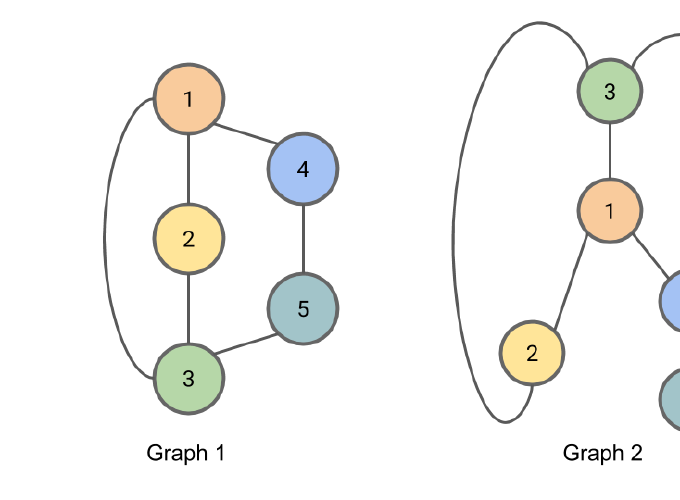 Two graphs are considered isomorphic if there is a mapping between the nodes of the graphs that preserves node adjacencies. That is, a pair of nodes may be connected by an edge in the first graph if and only if the corresponding pair of nodes in the second graph is also connected by an edge in the same way. An example of two isomorphic graphs is shown here.

Figure: Graph 1 and Graph 2 are isomorphic. The correspondance between nodes is illustrated by the node colors and numbers.

In general, determining whether two graphs are isomorphic when the correspondance is not provided is a challenging problem; precisely how hard this problem is remains an open question in computer science. It isn’t known whether there is a polynomial time algorithm for determining whether graphs are isomorphic, and it also isn’t known whether the problem is $\text{NP-complete}.$ The graph isomorphism problem may even be an example of an $\text{NP-intermediate}$ problem, but this would only be possible if $\text{P} \ne \text{NP}.$

When using this method to determine graph isomorphism, it may be applied in parallel to the two graphs. The algorithm may be terminated early after iteration $i$ if the sizes of partitions of nodes partitioned by compressed labels diverges between the two graphs; if this is the case, the graphs are not isomorphic.

Example of the Weisfeiler-Lehman Isomorphism Test

We demonstrate here the Weisfeiler-Lehman isomorphism test using the example graphs from above. The graphs are shown again here for completeness.

Figure: Graph 1 and Graph 2 are isomorphic. We will apply the Weisfeiler-Lehman isomorphism test to these graphs as a means of illustrating the test.

Since the partition of nodes by compressed label has not changed from $C_{2,n}$ to $C_{3,n}$, we may terminate the algorithm here.

Concretely, the partition of nodes by compressed label may be represented as the number of nodes with each compressed label. That is: “2 7s, 1 8, and 2 9s”. This is the canonical form of our graph. Since both Graph 1 and Graph 2 have this same canonical form, we cannot rule out the possibility that they are isomorphic (they are in fact isomorphic, but the algorithm doesn’t allow us to conclude this definitively.)

One detail omitted is that the algorithm requires canonical forms of the multisets for comparison. Placing the elements of the multiset in sorted order provides one way of doing this.

Finding the Correspondance Between Isomorphic Graphs

The core idea of the Weisfeiler-Lehman isomorphism test is to find for each node in each graph a signature based on the neighborhood around the node. These signatures can then be used to find the correspondance between nodes in the two graphs, which can be used to check for isomorphism.

In the algorithm descibed above, the “compressed labels” serve as the signatures. Since multiple nodes may have the same compressed label, there are multiple possible correspondances suggested by a Weisfeiler-Lehman labeling. The Weisfeiler-Lehman isomorphism test itself does not provide a way of narrowing down the possible correspondances further.

The Disappearance of Boris Weisfeiler

Boris Weisfeiler – one of the two mathematicians responsible for the Weisfeiler-Lehman isomorphism test – was a professor at Penn State University until he disappeared mysteriously in Chile in 1985. His disappearance in the 80s is unsettling, and I would encourage you to visit boris.weisfeiler.com to learn more about the search for Weisfeiler and the ongoing (2018) judicial proceedings surrounding his disappearance.

Steven List produced an award winning short film called The Colony based on the disappearance of Boris Weisfeiler, available on Vimeo here.

After a brief internet search, I have been unable to find any information about Weisfeiler’s colleague and coauthor A. Lehman, not even a first name. (Update Aug. 2020: A reader pointed me to this recent story about Andrey Leman. Thank you!)

There are applications of the graph isomorphism problem in, for example, computational chemistry and in circuit design.

In chemistry, it is common to represent a molecule as a graph, with the atoms in the molecule being the nodes of the graph and the bonds between molecules being the edges. Here, the graph isomorphism problem can be used to determine if two chemical structures are in fact the same structure. This is important for drug discovery, where scientists are working to create molecular structures that will be useful in order to fight diseases.

A circuit is commonly represented as a graph as well. The components in the circuit form the nodes of the graph, and the connections between components form the edges. The graph isomorphism problem is useful here for determining whether two circuits that are laid out different are in fact identical.

Weisfeiler and Lehman first proposed this method in their paper A reduction of a graph to a canonical form and an algebra arising during this reduction in 1968. An English translation of this paper, originally published in Russian, is available here.