For the March 2021 Climate Change Peer Learning Group, I spent a couple of hours learning about Oil Pricing. This proved far too large a topic to cover in the allotted time, far more so than for any of the other topics I’ve studied in a PLG before. Here’s what I learned.

I started with Wikipedia and some assorted Googling to get the basics of crude oil, shale, natural gas, to get an idea for their rough production levels around the world, and to learn a bit of history about OPEC. Eventually, I landed on this course from PennState: Energy Markets, Policy, and Regulation.

This course is an excellent resource, and I spent about an hour going through the first lesson (of 12), which is about the global market for crude oil. It was well written, interesting, and provided a good not-too-heavy mix of history, geopolitics, and economics to bring me up to speed.

Within each of these main categories of oil, there is a large numbers of kinds of oil. Take a look at the futures and indexes listed on these oil price charts to get a sense for how many different kinds of oil trade every day. The two at the top of the charts, West Texas Intermediate (WTI) and Brent, are the most important, as those two serve as benchmark oil prices for the rest.

WTI is a light sweet oil representative of the US market. Brent is a blend of light sweet crude oils from the North Sea, with just slightly higher levels of sulfur than WTI. 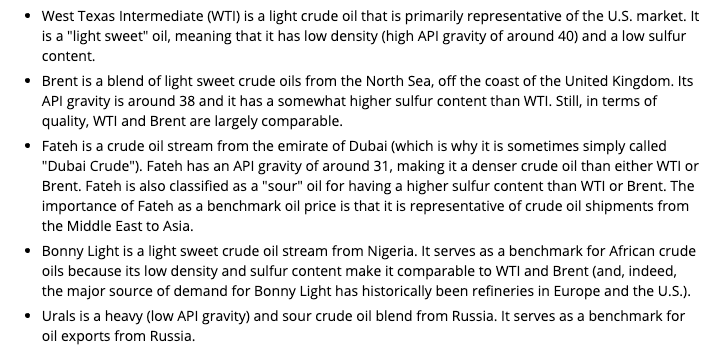 I like thinking about production in terms of barrels per person per month because you get nice tangible values that you can compare to your own oil usage. How often do you get gas for your car? How long does it take you to go through a barrel of oil yourself? Far more than a month, I’m sure.

A Wee Bit of History

There were important oil embargos in 1973 and 1979. I’ll summarize what I read about briefly here, but I recommend reading through the course’s text rather than this short summary. In 1973: an unwarranted energy scare leads to the Arab oil embargo. The Middle East countries announce a 5% production cut per month as a reaction to the Yom Kippur war between Egypt and Israel. Though they announced a 5% decrease in production, in practice decreased production less than 1%.

Main takeaway from this event: Cartel coordination is hard! Each country still had an individual profit motive, which prevented the embargo participants from carrying out their stated embargo.

The 1979 embargo: An Iranian worker strike lead to oil prices rising. Again, this was mostly due to speculation not an actual production decrease.

The main takeaways from these two events: Fear of control due to OPEC is just as powerful (perhaps more so) as the actual control exerted by OPEC. More recently, fear of geopolitical instability in the Middle East and Africa has a similar effect. It’s abundantly clear there is so much important history and geopolitics that I haven’t gotten to read about yet.

There is lots more from the PennState course. I’ll recommend it one last time for anyone who wants to dive deeper into the subject. This is a massive topic and I spent a little under two hours reading about it. So, there’s much more to learn! To see what else I encountered in my brief foray into the topic, have a look at my notes here on Roam Research. They’re world-readable and world-editable, so feel free to peruse or even make contributions if you’re so inclined.